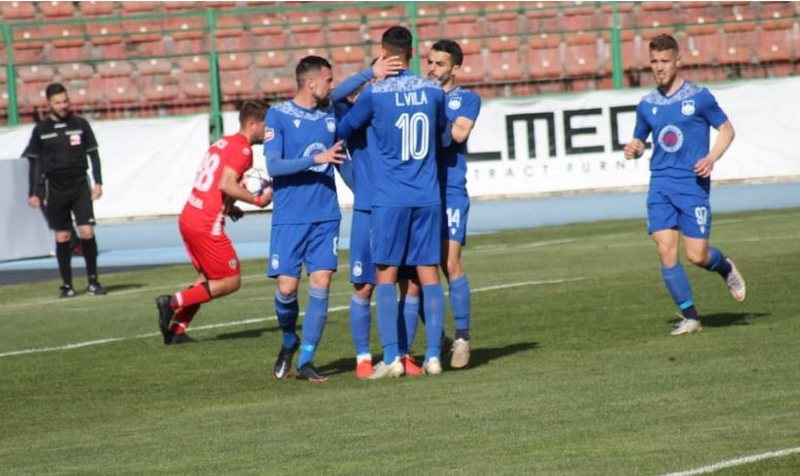 Week 33 spoke in favor of Teuta and Durrës are now the main contenders for the title, because there are 3 points difference from Partizan in second place, 5 from Laçi and Vllaznia, when there are still 3 weeks to play. With the blessing of the calendar that in the last challenge reserves the match with Apollonia knocked out of the Category, that hardly in its last confrontation in Superiore will find the motivation to stop a team that plays for the champion title. Until then, they have two finals, first with Partizan this Monday, and then with Laçi. Vital challenge with the red, with a victory in that challenge Teuta can put a hand and a half in the title, eventually pulling out of the fight the main rivals to win this championship. This even with the approval of mathematics, if they win with Partizan 6 points away, when there are two matches left, even if they end the championship with equal points, the coasters would be favored in the standings by the result of direct challenges with the red, where so far they are in absolute draw, another motive that adds even more importance to that meeting. It is a challenge where the coasters go with morale in the sky, the team is working miraculously, even in that aspect where there has been some kind of skepticism, scoring goals, full 6 scored in the last two meetings, while the defense remains their point of strong, only 1 goal conceded in the last 4 games. Anyway, Teuta's fate is that against Partizan, and even more so against Laçi, the next opponent, there are two results available from three after the draws work, exactly those that at the beginning of the season were considered cursed, now at the end,

Again the statistics, the duel will determine the details

The challenge that is played in "Niko Dovana" on Monday, will be crucial in all aspects. Both teams are in full balance in the current edition, as in all three matches played between them, in the end there were no winners. The two matches in the field of the capital have ended without goals, while the duel in Durrës ended with the result 1-1, with goals by Asan and Krasniqi in the first minutes of the duel. This means that the teams are in full balance in the eventual closing of the championship with equal points and that challenge in Durrës will be decisive for what is considered a "bonus point" between the two teams. In the Albanian championship, in case of a tie, the balance in the direct matches is taken into account first and then the general goal difference. Thus, who wins the match, in theory it gets 4 points as it secures the championship lead over the direct rival. Therefore, a victory of Teuta would end the fight for the champion title of Partizan, which would be impossible to pass the Durrës team in the rankings, no matter how the matches of the next two weeks were closed. While a victory of the reds, would pass them in the first place, although with equal points with Durrës, who as the main goal in this challenge will undoubtedly have to avoid defeat.

Eternal rivals, Partizani and Tirana, drew 0-0 in their derby within the round no. 33 in Superior. But what stands out is the dominance that the Partizan team made against Tirana. Daja's confidants have hit the gate of the current champions of the country four times, while they were stopped by Bekaj. From four corner kicks for each team, while the possession of the ball is in a small difference for Partizan, while it should be noted that the red team insisted on the goal yesterday, so much so that a goal for an offside position was canceled by Çinar . The red team is already 3 points away from the first place, but in the game more than ever for the title, moreover it plays with Teuta in Durrës next Monday and the goal is only victory, because the draw spoils a lot of work.