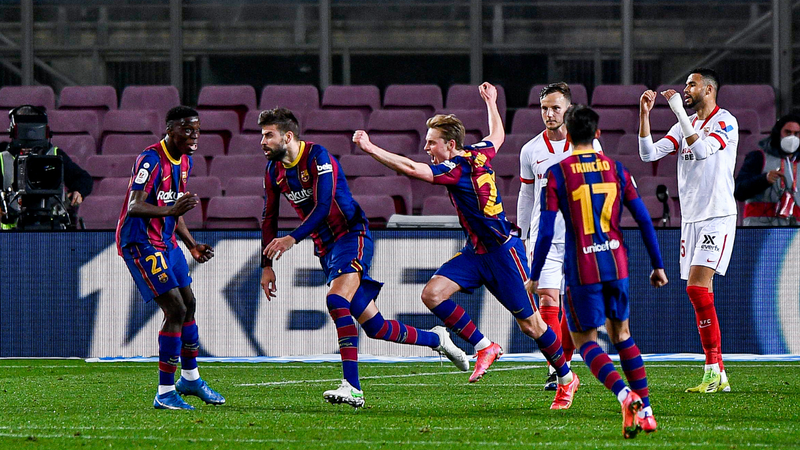 An impressive and very exciting victory for the public was the one played on Wednesday night in the semi-final of the King's Cup in Spain, where Barcelona defeated Sevilla 2-0 and secured a place in the final. It’s not just the qualification that matters, but the way he came to be. It is about a goal of the last seconds that led the meeting in extra time and then another goal of Barça made it pass the round. The one who became the hero of the evening was undoubtedly the defender Gerard Pike, who scored in the 5th extra minute and with that goal Barcelona led the meeting in extra time and finally won the match. But great qualification and enthusiasm has given way to injury balances. The first person to suffer is Pike, who seems to be missing for a long time for the Blaugrana team. Thus, Gerard Pike has suffered a sprain in the inner lateral ligament of his right knee, as confirmed by the Barça club in this Thursday's medical bulletin. The Catalan club does not specify how long the defender will be missing. Pike at the time of the injury had to get proper medical treatment off the field, but he decided to stay in the game. As we said, he closed the match with a very heavy goal, which was crucial in Barcelona's qualification to the King's Cup final. Kuman told a news conference he did not know the extent of the player's injury. Pike has been out of action for three months with a ligament injury in his right knee in the league match against Atletico Madrid following a clash with Correa. Losing the Point is a very big problem for coach Kuman. The central defender's return proved crucial to the team's good performance in recent games, beyond the incredible goal he scored in the semi-final against Sevilla. Meanwhile, Barcelona coach, Dutchman Ronald Kuman, is very happy with the triumph with extraordinary return 3: 0 against Sevilla in the semifinals of the King's Cup. Barcelona had lost the first game 2: 0 on the trip and needed another miracle to secure the final. As often in recent years, Barça made a fantastic upset last night, winning 3-0 and advancing to the final. Of course, it is the first final for Kuman on the Barça bench and it was the first match where his team fought for something important and where he personally, celebrated like never before on the Catalans bench.

Veteran strikers of the National Team towards "retirement", Reja takes a look at the youth in the Italian Primavera

Quality players who came from Kosovo and Macedonia did not make a difference, the best Mazrekaj

Porrini protects Reja from criticism: He has left traces wherever he has headed

Chaotic situation in the Cup match, the Albanian footballer remains lying on the field (VIDEO)