Kuman cut: I do not see Mesi away from Barça, this issue is closed 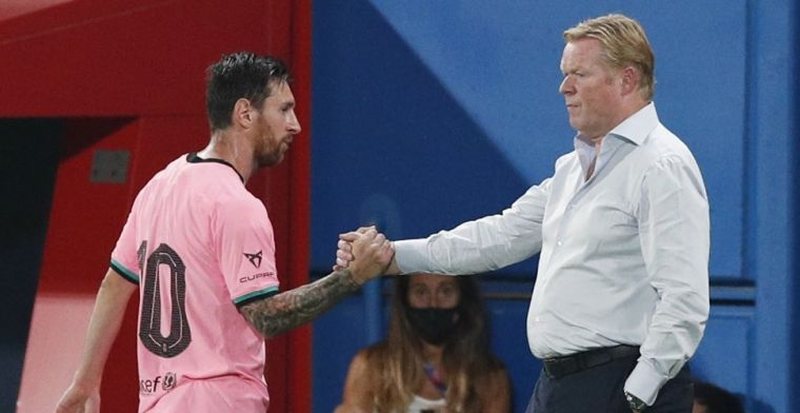 Barcelona is in one of its most difficult days, as the club has been hit by a severe financial crisis, which has come from the situation with the global coronavirus pandemic, as well as the internal developments that have accompanied the club blaugrana after the embarrassing defeat in the League of Champions last season and failure altogether during the edition that went to all the competitions in which it participated. And while the club is suffering the consequences of the financial crisis, the issue of "Messi" is current at every moment, because the Argentine "Flea" is no longer looking happy in the Catalan camp and everyone sees him as a player who is just waiting for the end of the season to 'u larguar. And yet, the Dutch coach of Barcelona does not think so. Thus, coach Ronald Kuman is convinced that Lionel Messi will not leave Barcelona, ??especially since there is no clash between him and Antoine Griezmann. "On the one hand, I understand why Leo can get hot. In my opinion, people like Messi should be respected a little more. After a trip, asking Messi about Antoine is a disrespect. You can create controversy. I have never seen any problems between the two. There are many times when you see them working well. I am not a person looking for problems. Someone said a few things and that person has not been employed by Griezman for many years. Do I see Messi away from Barcelona? No and I do not want to talk about it anymore. "I no longer give answers to these things," Kuman said. In the end, he also had a comment on the renewal of Pep Guardiola whom many have seen as a candidate for the future of the Barcelona bench. "It is important for Pep to continue as coach as it is a benchmark for all other coaches. I am happy for him, as he is very good at City. I wished it yesterday. "If he is happy, I am happy." Meanwhile, it is admitted in the Spanish media that Barcelona is in financial crisis and has planned to sell 6 footballers. Barcelona is planning to remove at least six players from the team, to reduce costs due to the crisis caused by the coronavirus. According to the Spanish daily "Marca", coach Ronald Kuman no longer counts on the services of defenders Samuel Umtiti and Junior Fripo. while, among the players to leave are Riqui Puig and Karles Alena. Neither Antuan Griezman nor Osman Dembele have a safe stay at the Spanish club. By selling these players, Barcelona is aiming to create funds to strengthen the team during the January transfer window. On the other hand, as Kuman makes plans for a long stay at the helm of Barcelona, ??it seems that the team is coveted to be led by an Argentine coach, namely Mauricio Pochettino. According to the Spanish sports media, which are not opposed even by the British sports media, Mauricio Pochettino is open to take over Barcelona, ??according to the latest reports from the international media. The former Tottenham coach, who has strong ties to Espanyol, has reportedly twice turned down the Catalan giants in the past. However, according to reports he is now open to listen to offers. Pochettino has been a free agent since leaving Tottenham last year.

Barcelona honors Maradona with a minute of silence, Messi's attitude attracts everyone's attention and makes the rounds of the world (PHOTO)

World Cup "Qatar 2022", FIFA officializes the pots, this is where Albania is positioned!

Conspiracies begin, Maradona's lawyer: The half-hour delay of the ambulance was criminal

The next "victim" stump from the Superior benches, endanger the technicians of Bylis and Apollonia