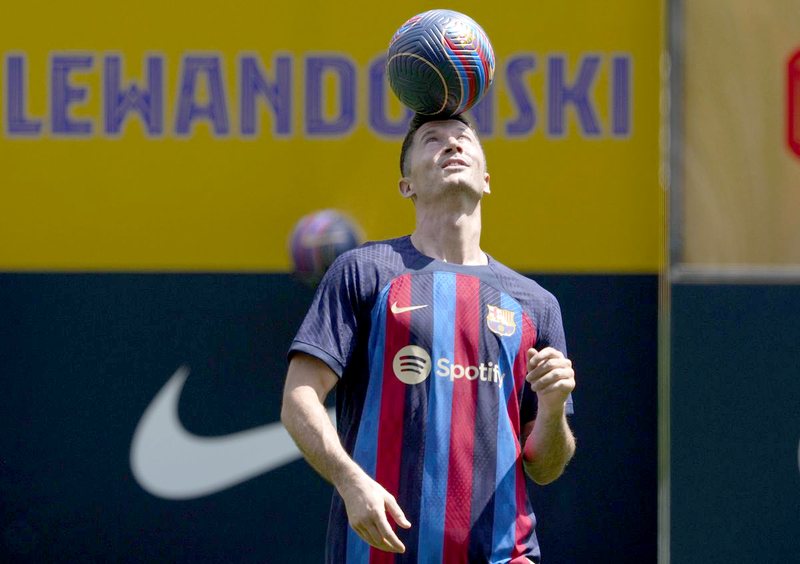 The Polish striker was officially presented yesterday at the "Camp Nou", he will wear the jersey number 9, as he had requested, Dipaj gave it to him

Robert Levandovski was presented to the Barcelona fans yesterday. The Polish striker had appeared with the Catalans in the pre-season matches, but yesterday the ceremony of his official presentation was organized at "Camp Nou". Levandovski also appeared at the press conference, where, among other things, he said that he is ready for the rivalry with Real Madrid. "Of course I want to play in 'El Clasico'. Ready to face Real, I know how to play against them. "Last season was very good for them, but Barcelona are here to beat them," he said. "I don't think about Real Madrid or Benzema. He is an exceptional striker, he has played in La Liga for many years, but it is important for me to play well for Barca, not against him," added the 33-year-old. Robert Levandovski was presented today to Barcelona fans at "Camp Nou". The Polish striker had been introduced to the Catalans in pre-season matches, but this did not dampen enthusiasm as thousands of fans gathered to see him at the official presentation ceremony. Perhaps the most interesting detail is that he came out on the field wearing the jersey with the number "9". Levandovski wore the jersey number "12" during the pre-season matches, as Memphis Dipaj wore the number "9". However, it seems that the issue surrounding this number has been resolved and the Dutchman has given up. The 33-year-old was accompanied to the field by president Joan Laporta, who did everything to thank sports director Mateu Alemani and the player himself, but also Levandovski's agent, Pini Zahavi, for his help in reaching an agreement. "Good morning Kulers. I am very happy to be here, thank you!", were Levandovski's first words to the fans. We remember that Robert Levandovski was officially signed to Barcelona on July 19. Meanwhile, the sports director of Barcelona, ??Mateu Alemani, has confirmed that the club had an agreement with Çesar Azpilicueta, but not with Chelsea. The Catalan club also requested the transfer of the Spanish defender this summer, but this move is not expected to be realized. Alemani confirmed that Barcelona had an agreement with the player, but that Chelsea refused to sell him. "We had an agreement with Aspilicueta for a contract, but Chelsea refused to sell him," he said. "Barcelona has other opportunities to strengthen this position", Alemani added, but did not mention names. We remind you that yesterday it was announced that Azpilicueta has extended his contract with "Blue". The 32-year-old's contract now runs until June 30, 2024.

Seferi leaves Tirana, he is expected to play in a foreign championship