Mitaj excited in the National, Sadiku is punished for the missed penalty 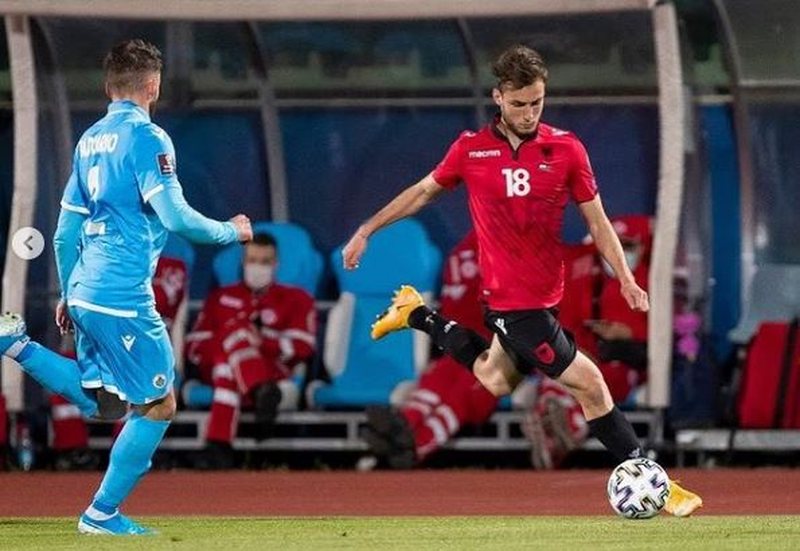 National team players are rushing to improve their individual statistics at the end of this season, to increase not only their positions in the respective teams, but also to be in more favorable conditions during the summer market, in order to have more chances. for their careers. There are those elements who have fulfilled their dreams, but there are others who are going from failure to failure, such as the case of striker Armando Sadiku, whose adventure from Turkey to Bolivia seems to be taking a negative shape, as the player forgot to mark. Missing goal and for a striker this is fatal. Meanwhile, defender Mario Mitaj seems to have fulfilled his dreams for this year, as at the end of March he was given the opportunity to debut with the representative of Albania, a few minutes but which are sacred to the colors red and black.

Mario Mitaj has recently returned to his debut with the Albanian national team in the World Cup qualifier against San Marino. The defender tells "Nova Sports" that it was a dream for him, while he adds that he did not expect it to be activated. "It was really a dream for me to debut with my national team. The truth is that I did not expect something like that in the last three games, as it was the first time I was invited to the big national team. I was performing very well in training and the coach gave me the opportunity to make my dream come true. The youngest who plays with Albania? Of course I feel very good and I am very happy. "It motivates me to keep working hard, training and improving as a player." The players with whom he formed more friendships- “With the Hysaj of Naples and the Plum of Rome I got closer. In general we are all friends, I stayed with everyone and they welcomed me and treated me as an equal. They helped me adjust as quickly as possible and it was an unforgettable experience for me. I also became very friendly with Strakosha. He and Laçi helped me a lot and advised me. Both are good boys. They also speak Greek, so we got very close. I thank them and wish them the best ", said Mitaj.

Sadiku sits on the bench, due to missed penalty

Armando Sadiku's adventure in Bolivia is not going as planned. In four games with Bolivar's team, the national team striker failed to find the net as he squandered many opportunities. But, the most flagrant was in last week's meeting where the Albanian lost an 11-meter, which fortunately did not affect the result of the challenge and the weight of the guilt was reduced. However, this missed penalty was not passed without a "penalty" for Sadiku, as in last night Bolivar's match against Tomajapo, the 29-year-old was not reserved for a single minute of play. Sadiku spent it following the entire 90-minute from the bench, while his team won 2-0. Thus, the striker has received the lesson and must start reacting from the next match, so as not to make this new career adventure a failure.

Marash Kumbulla went down last night as a starter with Roma in the match that the latter played, against Sampdoria. The national team defender had been absent for several weeks as a result of a knee injury, at the time when he was gathered with Albania. However, when it was thought that everything was left behind, Kumbulla showed concern again and was forced to be substituted in the 63rd minute. In fact, the defender felt uneasy from the first half as he had a duel with Thorsby and the knee made the technical staff worry that for a few minutes they took care of him. But in the second half, Kumbulla surrendered as he had back problems and was replaced by Ibanez, while now the national team player will miss Thursday's Europa League match against Manchester United, while it remains to be understood the time of return to the field.

Convinced on the field with Vitesha, Chelsea prepares the return and renewal with Armand Broja

Kukes takes Shkodra out of the title race, gives a hand to Vllaznia rivals