Unusual views! The players and the fans are terrified, the police enter the field with weapons 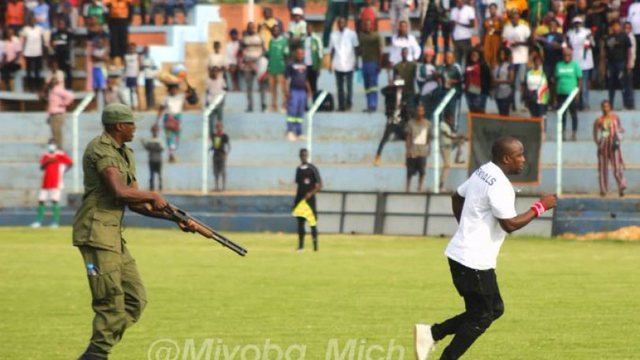 Some totally unusual images are circulating on social media, from the Green Buffalo-Nkana match in the Zambian championship, which ended 5-0 for the locals. A Nkana fan entered the field after the embarrassing result from his team and risked being left dead there. He tried to attack the coach of the heart team, as he was extremely irritated by what he was looking at the field.

However, the police immediately entered the field, who started chasing the fan in the stadium, threatening to shoot him if he did not leave. The photo shows the policeman following the player with a gun in his hand, terrifying all the players, but also the fans present.

Barcelona honors Maradona with a minute of silence, Messi's attitude attracts everyone's attention and makes the rounds of the world (PHOTO)

World Cup "Qatar 2022", FIFA officializes the pots, this is where Albania is positioned!

Conspiracies begin, Maradona's lawyer: The half-hour delay of the ambulance was criminal

The next "victim" stump from the Superior benches, endanger the technicians of Bylis and Apollonia