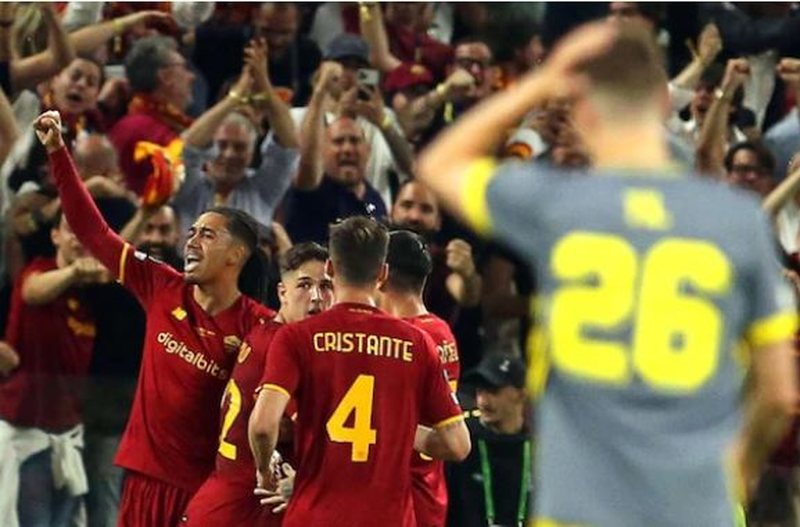 Rome has won a European competition for the first time in its history. Jose Mourinho's team triumphed 1-0 against Feyenoord and the hero was Nicolo Zaniolo. In history also Jose Mourinho, who after the Champions and Europa League triumphed in the Conference League, becoming the only coach who has all three of these competitions.

MATCH - A final that started lukewarm, with two teams trying to study each other and not leaving much space. The first minutes do not donate much, with both teams making mistakes in passes, which also leads to a lack of chances to score.

In the 15th minute Roma also lost Mkhitaryan due to injury and his place was taken by Oliveira. However, Roma managed to light up the atmosphere after half an hour of play. Nicolo Zaniolo was the one who punished the Dutch team, after a perfect pass from Mancini, and the Italians erupted in celebration when they saw that the ball crossed the fatal line.

Of course Mourinho's teams with the result 1-0 are clear what they want to do and manage in the first 45 minutes not to be punished, although in the 41st minute goalkeeper Rui Patricio showed insecurity after a shot from outside the area. 0-0 and the teams headed to the locker rooms.

Feyenoord kicked off the second half and immediately came very close to scoring, through Trauner. His shot was stopped by the upright post, and Til's attempt was then stopped by goalkeeper Rui Patricio.

Again the Portuguese savior in the 50th minute, when he deflected the ball fired by Malaysia and was assisted by the post. Tough moments for Jose Mourinho's team, which is gradually recovering.

With Veretout in the 73rd minute he tries to surprise with a shot from distance, but Biljoë stopped the midfielder of the Italian team. Sinisterra nine minutes later did the same and passed the ball into the hands of the yellow-red goalkeeper. In the following minutes there was no more goal and Roma won the first season of the Conference League.

Zelimkhan Abakarov: I have not yet achieved significant success, when I win the World Cup it can be called an achievement

Change of plans for the striker of the national team, Juventus sends Vrioni to...

The football star experiences moments of horror, he is attacked by armed robbers

"I will give my soul to make you proud by rising to the top of the world"/ Boxer Florian Marku gives the news you were waiting for: I am coming back for all of you in the middle of Tirana