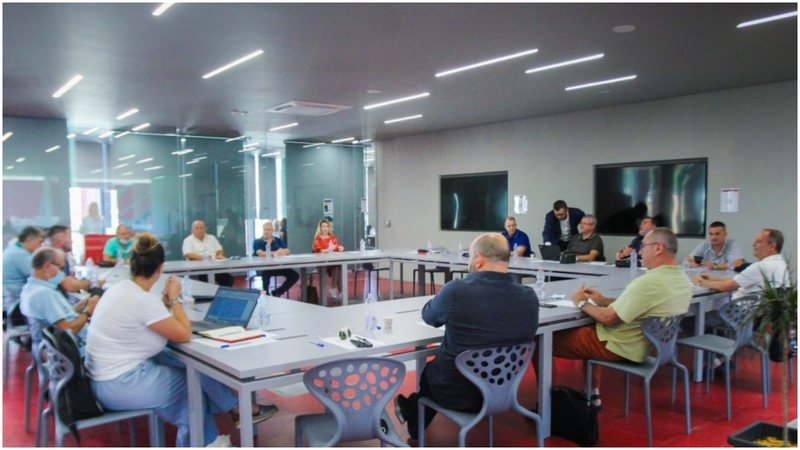 On Saturday, there will be elections in the Albanian National Olympic Committee. These elections are extraordinary, as it is known that the previous president Viron Bezhani was dismissed and the electoral assembly will elect not only the new president, but also the new governing bodies of the Olympic institution in the country. But before the elections, clashes have started, which warn of a "storm". This not at all good situation should be related not only to the previous clashes between Secretary Stavri Bello and President Viron Bezhani, but also to the interventions of the parties that apparently have political support. Anyway, April 17 has been set as the date for the holding of the Extraordinary Electoral Assembly in KOKSH, but these elections have not seen Armando Duka of football, who is holding the "flag" of the opposition to the developments in KOKSH, with the idea that regulations and laws have not been implemented and that many federations were unaware of these developments and consequently elections should be postponed. The official request for postponement of the elections in the NOC registers the peak of the clash, which shows that the situation can escalate from moment to moment.

Letter to the ALF: Postpone the elections

The Albanian Football Federation, through an official letter of its president, Armand Duka, has officially addressed the NOC, where it expresses its objections regarding the organization of the General Electoral Assembly of the Olympic Committee on April 17, requesting its postponement. and providing a solution to the situation of lawlessness in which the Albanian Olympism is currently sailing. The President of the Federation Armand DUKA, in his response to a request for expression of opinion by the Albanian National Olympic Committee states that the so-called Commission of Verification and Ethics, whose legality is being reviewed in court has taken over the powers of the assembly itself by make decisions on participation in the assembly. The commission in question, a few days ago, through an unprecedented and scandalous decision, expelled 23 federations from the April 17 Electoral Assembly, including the Football Federation. For this reason, the governing institution of Albanian football through President Duka, recalls that through not at all normal decisions the Electoral Assembly of the NOC endangers the quorum for its holding, even though in January in such prohibitive positions illegally held the Statutory Assembly. In these conditions, the Albanian Football Federation proposes to the NOC, that since the circumstances of this Electoral Assembly are significantly under a political influence, and any decision otherwise violates their legality, the fairest way is that the assembly scheduled for 17 April to be postponed taking and the following measures, in the future to convene a new assembly, which will initially solve the problem of NOC membership, registration of this decision in the Tirana District Court according to the law and only then can the General Electoral Assembly be held. The official letter of the President of the Football Federation Armand Duka, closes with the conviction that these are necessary steps to end this ugly chapter in the Albanian Olympism.

If most of the federations do not participate in the voting and if there will be claims, then in the future the institution may remain hostage to constant clashes. However, the steps taken recently are within the legitimacy, based on the statute, and this has made the election organizers have the peace of mind to go to the end of the elections and normalize the situation. Political interference can have negative effects and the constant demands of the Football Duke that these elections be postponed or not be recognized warn of an impending stalemate in the head institution of the Albanian Olympism.