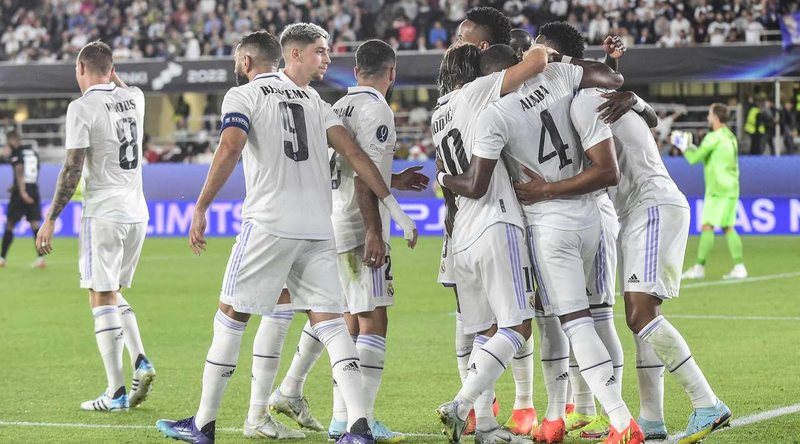 Real Madrid won the European Super Cup by beating Frankfurt 2-0 in the final.

Los Blancos scored a goal for each half Alaba 37′ and Benzema 65′.

65′ GOOOOL REAL MADRID 2-0/ Karim Benzema doubles the numbers. After the assist of Vinicius, the attacker does not forgive at the entrance of the area! Party breaks out in Madrid!

60′ Traversa denies the goal to Casemiro. The Brazilian midfielder tried a shot from outside the area, but the attempt was blocked by the crossbar.

55′ Frankfurt escapes from conceding the second goal. The ball hit by Vinicius, hits Benezem and then goes to the body of the goalkeeper Trap.

51′ The Germans gain ground by advancing forward, but there are no dangerous chances in the respective gates.

The first part is closed!

41' Benzema has the opportunity to end the game with a shot in the frontal position, but does not find the square of the Eintracht goal.

37' GOOOL Real Madrid. After taking a corner, the ball goes to Benzema who takes it to Casemiro. The latter passes it to Alaba, who alone in the area takes the ball into the net.

37' Spectacular action by Vinicius who appears on the left wing. He finds space and shoots at the far post, Trap deflects the ball into the corner.

24' Knauf attempts a shot from the right of the area, Kurtua is in position at the first post and punches the ball.

17' Madrid's quick action with Benzema putting Vinicius in a shooting position, but his attempt is stopped before crossing the fatal line by Tuta.

14' Kamada appears in front of Kurtua and shoots at the goal, but the Madrid goalkeeper punches away the danger.