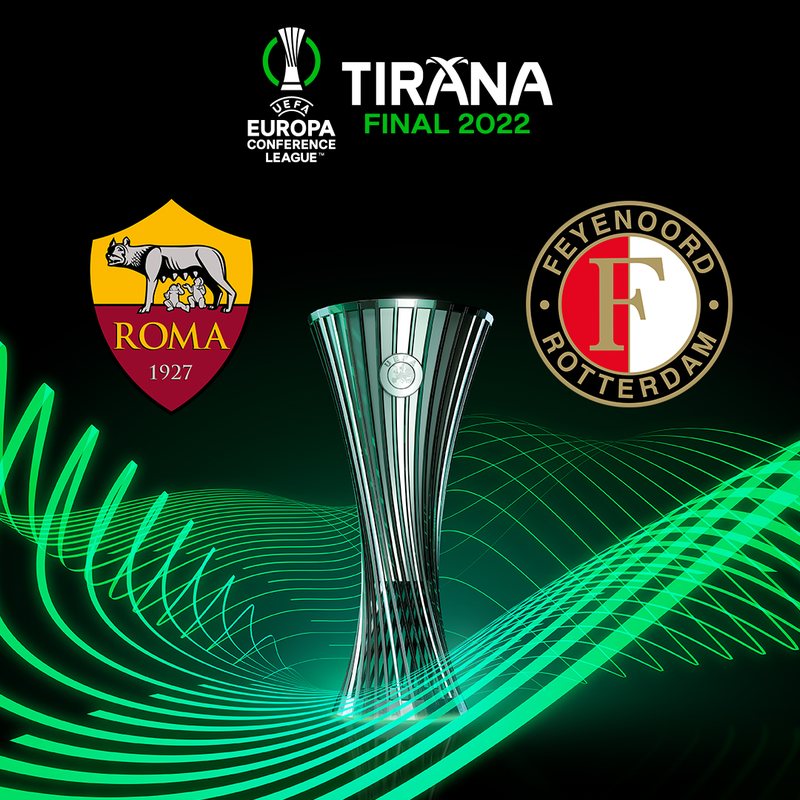 Tonight, at 21:00, will be played at the stadium "Air Albania" in Tirana one of the most important European matches for clubs, namely the final of the UEFA Conference League, Roma-Feynord. Tonight, Tirana and its stadium will be in the center of attention of sports fans around the world, moreover that in the final are two high level teams, prominent names of European football and at the same time two sworn "enemies" given the clashes that these two clubs have had in recent years. "Air Albania" stadium is today the most clicked in Europe and the capital of the country, one of the cities with the most visitors in Europe and beyond, due to the large presence of fans of both clubs. Yesterday morning, the Conference League trophy that will be given to the winner today was presented in "Skënderbej" square in Tirana. while in the evening spoke the coaches of both teams, Jose Mourinho of Rome and Arn Slot of Feyenoord, who expressed enthusiasm for the success of their teams. Everything seems ready, well organized by UEFA and Albania.

Mourinho: I feel happy to play in an Albanian final

Coach Jose Mourinho appeared at the press conference yesterday and showed his ambitions for victory, while thanking our country for the organization and the beautiful stadium in Tirana. He did not forget to mention Kumbulla, the Albanian defender who plays for Roma. "It's my first time here. It is one of the only places I have not visited. It's very good to be here. I am very happy with the airport because when we played against Vitesse, we stayed at Eindhoven airport for two hours. Here everything is beautiful, the stadium is beautiful. UEFA can be criticized that the stadium should have 60 thousand seats, but the rates can not be criticized that bring football to any country. I feel good and happy that I will play an Albanian final. Luckily it's a final and we should be glad we got there, no matter how it will go. I feel this finale, as my first finale. We have an Albanian player in Roma, Kumbulla and if we win, then an Albanian will win. He is a very good guy, he is learning a lot and he will be with us next season, 100%. "He has the potential to become an even better player," said Mourinho.

Arn Slot: Feyenoord is not afraid

Feyenoord coach Arn Slot stressed yesterday from the press conference that reaching the final of his team was a great success and now he would like to win the trophy. He said he was not afraid of Rome and Mourinho, although he has respect for their work. "As a coach, it is great to reach the final, but it will be even better if we win the Conference League. The boys managed it themselves. Players should see this as a great encouragement and not necessarily as pressure. But they should not completely remove the pressure. Fortunately, they do not show any behavior different from the rest of the year. We have to do what we have done all year. Maybe they play with long balls. "It is interesting to see how our players will react in this final," he said.