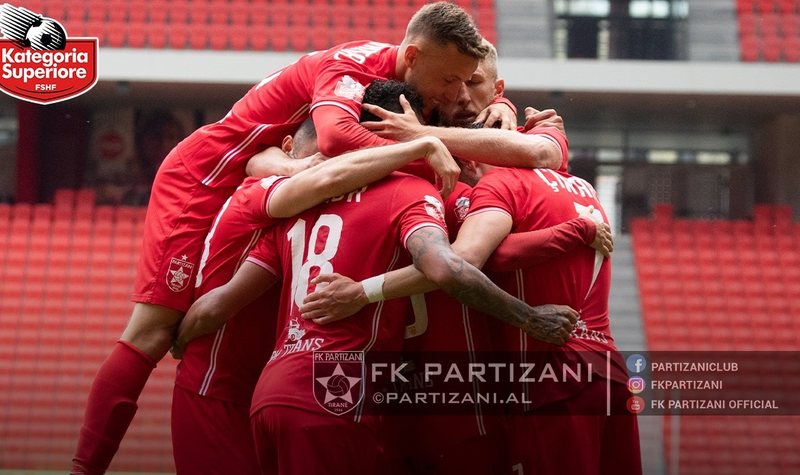 The 27th week of the Superior Category ended yesterday with the match Partizani-Bylis, which confirmed the good form of the "red bulls" and their deserved victory, a victory that came in deep figures 3-0 and a three-pointer that brings the team of coach Ilir Daja closer to the leader, Teuta, with a difference that is now only 2 points (49-47). Even after this week, the rivalry remains great and 5 teams continue to hope in the title race, something that makes this season special.

After two consecutive goalless draws, Partizan returned to victory, thanks to the fastest goal of this season in Superiore, after only 16 seconds of Stenio Junior and the finalization of Asan and Çinar. A clear 3-0 that could have been deeper for Daja's team if the Reds had not abused endlessly in front of goal, and why Çinar's last goal was to be placed in the frame. Only 15 seconds the balance lasted. Stenio Junior put the red team in the lead, after a mistake by goalkeeper Cirko. the brazilian footballer did not forgive, shaking the net. In the third minute, the only clear case was registered for Bylis with the striker Antoni, who alone before Hoxha, after the mistake in passing Bitri, failed to defeat the goalkeeper of the reds. Partizan dominates the game, creates consecutive chances, but the Reds' attackers, especially Chinar, abused a lot (25 ', 31'). Partizan found the net with Çinar, after a perfect scheme from the penalty spot, but the goal was canceled for offside position. Unbelievable what Çinar loses inside the area in the 59th. After Hakaj crossed from the left, the Partizan striker could not finalize, close to the penalty spot, sending the ball out of the box. After putting Zirkon in trouble with a shot from outside the area, Asani scored the second goal in the 69th, served by Çinari, who moved nicely from the left, 2-0. Another golden chance for Partizan with Cardozo, but the striker fails to score with his head alone inside the area. After Chinar crossed from the right, the Brazilian's header was weak and ended up straight in the hands of Cirko. Eraldo Çinari finally found the goal in the 84th, after an individual incursion, helped by the deflection of the defense. It was closed 3-0 for Partizan, which got a heavy victory in the capital, reached the second place in the ranking together with Vllaznia and increases the chances in the race for the title.

Daja: Thinking about the next game, I liked the team today

Partizan coach, Ilir Daja, did not hide his joy after yesterday's victory against Bylis, saying that euphoria should not take place and that Partizan should think now about the next duel. According to him, the goal is achieved when the team wins continuously. "We should not play the game for a victory and go to the title and a draw to review the objectives, we will take the weekend match with Kastriot, we will take them one by one, if we create volume and chances in front of the gate, we will have things in line. Otherwise we will go back to the draws and we are not allowed to make mistakes. The team that opens the door for us is the next team and this time Kastriot opens the work for us because there are no easy matches, there is no big difference with what is at the bottom of the table. The experience and quality of some players is probably lacking. If you do not rate them, I think we will make the biggest mistake if we look at them in parts of the table. The lack of points, we have with them from the middle and bottom of the table, I think everyone is difficult. "Since there are no fans in the stadium, we do not suffer much from the transfer", said Daja, among others.