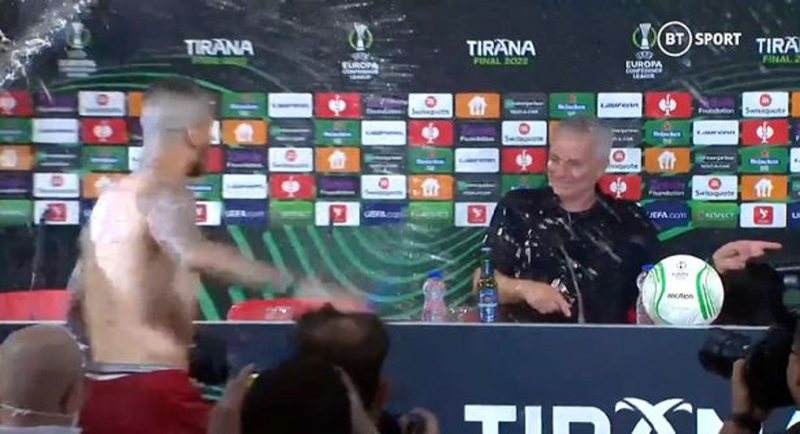 Rome coach Jose Mourinho drank champagne during his press conference, after the Tirana final, after lifting the inaugural trophy of the Europa Conference League. The Portuguese coach led Roma to the trophy against a stubborn team like Feyenoord.

Nicolo Zaniolo's goal in the first half was enough for the yellow and reds. Overall, this was Mourinho's fifth major European title, having twice lifted the Europa League with Porto and Manchester United, while he also has two Champions League crowns in his name.

It is certainly an achievement with Rome, which has never enjoyed European glory, while the previous trophy of the yellow and yellow capitals dates back to 2008 with the victory of the "Coppa Italia".

Mourinho was certainly at the center of the festivities along with his players after the match, while his post-match media engagements were also interrupted. A number of Roma players stormed the coach's press conference and "showered" them with beer.

Mourinho was then forced to leave the conference and continue celebrating elsewhere at the National Arena. However, he still had time to hail Rome's arrival in Tirana, as he had targeted the glory in this competition since September, the opening group match against CSKA Sofia.

Speaking to Sky Sport Italia after the triple whistle, Mourinho said: "There are so many things going through my head. So many things at once. I have 11 months in Rome, I realized that the moment I arrived what it meant, the fans were expecting this.

As I told the boys in the locker rooms in Turin, we did what we had to do, qualify for the 'Europa League'. We did a great job throughout the season. This was not work tonight, it was history. We had to write the story. "Now we have written it."