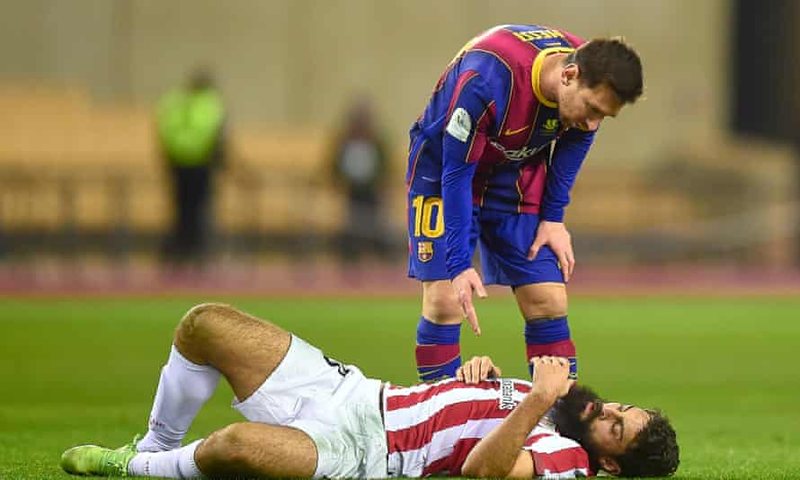 Lionel Messi is one of the best players in football history, unquestionably. But even the best sometimes make mistakes. Thus, the Argentine "flea" received the first red card in his career and even for unsportsmanlike conduct, after he slapped an opposing player while walking. So it took Messi to return to the center of debate around the world sports opinion. This after he was penalized. But Barcelona has decided to appeal against the decision of the Competition Committee of the Spanish Football Federation to suspend Lionel Messi for two matches, for the red card that the Argentine received in the final of the Spanish Super Cup. The Federation's Competition Committee sentenced Messi to two games of non-play after assessing the incident on Tuesday, but the Catalan club has decided to immediately appeal the lifting of this suspension. The suspension means Messi will miss Barcelona's next two games against Cornella in the Copa del Rey and against Elche in La Liga. Messi was sent off in Barcelona's loss to Athletic Club for hitting Asier Vilalibren with excessive force in an attempt to clear the way for himself during a last-minute extra-time action by his side. in Seville. The Argentine was only punished by the VAR for interfering, as the match referee had not seen the incident. This was the first time Messi was sent off in his career as a Barcelona player in no less than 754 games to date. As a result, he will miss the 1/8 final match in the King's Cup against Cornella this Thursday and against Elche in La Liga on Sunday afternoon. The referee had not seen the incident but after the intervention of the VAR room and the review of the case, the Argentine was directly punished with the red. This was Messi's first red card in 753 appearances for Barcelona. According to Spanish media, Messi was extremely disappointed and had apologized to his teammates in the locker room after the match. Meanwhile, a blow below the belt has come for Messi this week, where one of the former Barça players, who played with the Argentine, has preferred Cristiano Ronaldo to the "flea", but this may have been influenced by the fact that the player in question is now part of Juventus. Thus, Juventus midfielder Arthur has played with both, Lionel Messi and Cristiano Ronaldo, but explains why he would choose CR7. The former Barcelona footballer was asked by Desimpedidos do Brazil with whom he preferred to play between Messi and Ronaldo. "They are both great leaders, but they have a very different way of making their impact felt," Arthur replied. "Leo does not talk much, but he makes known his presence on the field with his talent and desire to be a protagonist. Chris, on the other hand, talks a lot with everyone and is a great presence in the dressing room. He is also obviously very eager to have the ball and score goals. It is not an easy question to answer, because they are two fantastic players, but between the two I would choose Cristiano "said Arthur. He transferred from Barcelona to Juventus in the summer transfer window.