Video/ Lewandowski receives the 'blessing' of Shevchenko, in the colors of Ukraine at the World Cup in Qatar 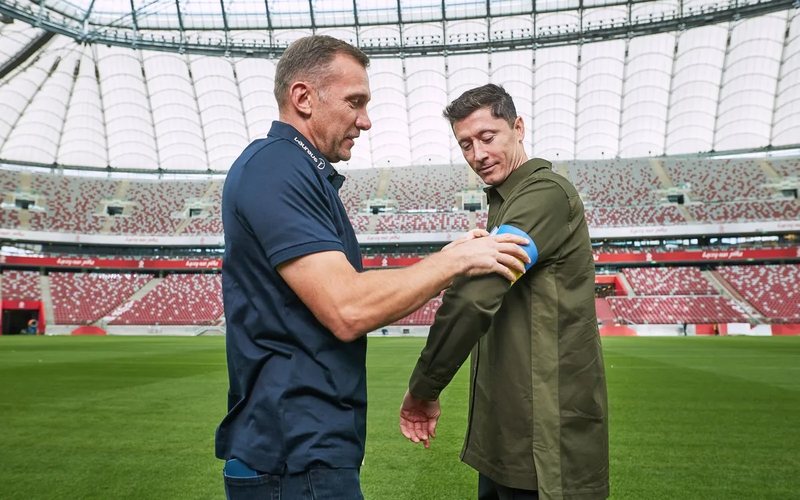 Robert Lewandowski took from the hands of Shevchenko, the ambassador of "Laureus", a captain's armband in yellow and blue, with the colors of the national flag of Ukraine. This gesture was recorded at the national stadium in Warsaw.

A few months ago, Lewandowski publicly supported the Ukrainian people, playing for the first time with the captain's armband representing the Ukrainian flag, shortly after the Russian aggression began. The gesture was shared by many, but apart from that, Poland has shown itself to be extremely close to its neighboring people. Polish footballers quickly positioned themselves in the conflict and refused to play against Russia.

Now Schevchenko, heavily involved in the cause, wanted to thank Lewandowski and the Poles personally for their support. "It's a symbolic gesture, - said Shevchenko. - I express our thanks as a nation to Robert and the Poles, for everything you do for us. I would like Robert to symbolically wear this captain's armband at the World Cup."

A request of the former star of Milan, which the Barcelona player has already accepted immediately" "I will keep the colors of Ukraine by my side in the World Cup in Qatar. As a player and as a person, I support peace and I think these symbolic gestures are important.

I felt that playing with the Ukrainian colors, as I did right after the invasion of their country began, would be a clear gesture on my part, showing the world that this war is really happening. Athletes should also talk about this.

I would like to thank all Poles for the help they have given to Ukraine in various ways. The history of the tape is a bit curious. I was playing for Bayern away from home, so I had to improvise one. I sewed it myself, combining the colors before the match".