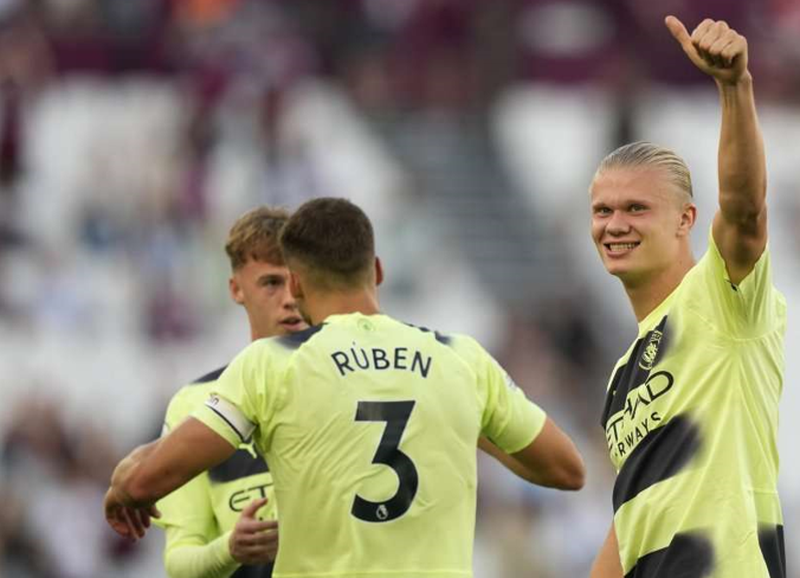 The English championship has become the most competitive and quality football competition on the planet, leaving behind rivals from other European leagues. This happens due to the fact that the English have invested and brought the best quality players in circulation to their championship. This summer, the Manchester City club received one of the biggest European talents, as is Norwegian Erling Haaland, a player who made an excellent start on Sunday in City's first game of this season in the English championship. In fact, Erling Haaland has said this is just the beginning, after scoring twice on his Premier League debut. Manchester City won 2:0 against West Ham United on Sunday with Haaland's two goals. The Norwegian won and then calmly took the penalty, before concretizing in the goal on a pass from Kevin de Bryjn. Haaland became the first player to score two goals on debut since Sergio Aguero. "It's about the bond we make every day in training. There will be other things, so I'm not worried. There could have been more goals", emphasized Haland. The footballer is seen as the successor of Aguero, who is the best scorer of all time. Pep Guardiola's side have won the last two Premier League titles without playing a typical striker. The coach of City, Guardiola, has expressed his happiness with how quickly the transfer of Haland has started to pay off. "Erling is a good finisher and is adapting very well," said Guardiola. "He was good. I can't teach him to score goals. So it just has to be comfortable", said Guardiola. Haaland is only 22 years old and is already one of the best strikers in the world. He excelled at Borussia Dortmund where he played from 2020 until this summer. He has set many records in the German team. He also had a good period in Salzburg in Austria. In fact, it has been known since the beginning that Dortmund will be Haaland's intermediate club on the way to the highest level. At City, he is expected to be confirmed as one of the best in the world. And the beginning immediately made this clear. Haaland is Norway's biggest star. In 21 matches with the representative team, he scored a total of 20 goals. His numbers are scary for his age and Haaland seems to be quickly transformed into the new world "star", eclipsing great players like Mesi and Ronaldo, but also younger ones like Nejmar and Mbappe.