Eva Golemi: "La Traviata" work that should be in the theater repertoire every year, one of the most popular and performed operas in the world 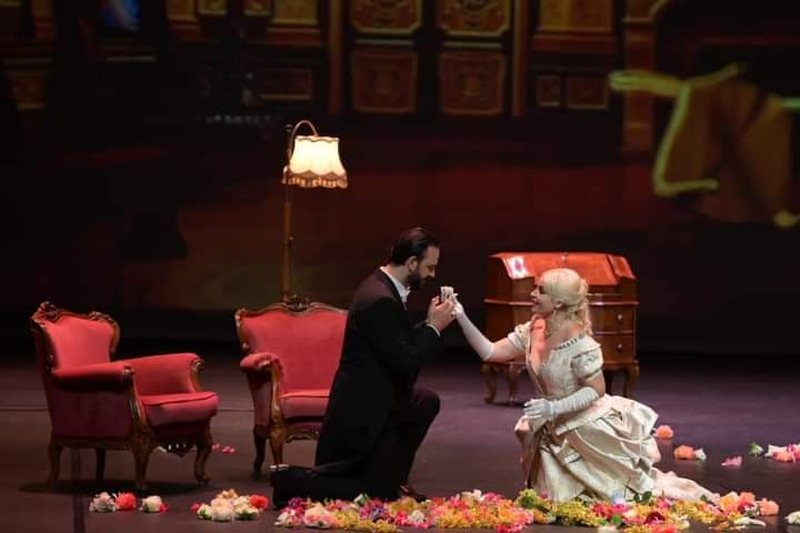 The mundane life of late 19th century Paris, the aristocratic salons, the love, the rage and the intrigue in the story of Violetta and Alfredo, are in Verdi's opera La Traviata. Verdi's opera is back on the stage of the National Theater of Opera and Ballet. It is a story of a courtesan, who falls in love with a nobleman, but the boy's father prevents their love. Verdi's three-act opera at TKOB features four performances on the new stage, which welcomes four different castes of artists. After the weekend evenings on the 23rd and 24th, the opera will also be on the 25th and 26th of October. On the first night with the role of Violeta on stage was the famous soprano Eva Golemi. The soprano says that "La Traviata" is one of the most executed operas on stage. "A very important work that should be in the theater repertoire every year, as in any theater in the world. "One of the most popular operas performed in the world by any theater," she said. Violeta for the soprano is a very beloved role, which as she shows and she has played since the age of 24. Soprano Eva Golemi says that the public welcomed this return of the work. "It's extremely beautiful. "A special emotion after all this long waiting period", she says. Golem has played this role over 70 times on stage. She shows that Violeta fits her vocally as well, but shows that she is the pinnacle of a soprano. "Violeta is the biggest and most important role for a soprano. A role I have played over 70 times. It's a role I love very much, it's the tip for a soprano and it suits me very vocally. It is the role I have played the most in my career, both here and abroad from Italy, Germany, England,

"La Traviata" by Giuseppe Verdi is a very famous opera, which is based on the work "The Lady with the Camellia" by Alexander Dyma. At the center of the work is the courtesan Violeta Valery, who for the sake of love with the noble Alfredo Germont, abandons the life of a courtesan. In "La Traviata" in this return to TKOB are participants the orchestra of TKOB, choir, conductor Deniola Kuraja, director Magdalena Fuchsberger, as. director Ada Gurra, costume designer Ardi Asllani, choreography and soloists Enada Hoxha and Gerd Vaso, choir conductor Dritan Lumshi, concert master Ingrid Pulizo and Etrita Ibrahimi. Violetta Valery-Eva Golemi, Nina Muho, Simona Karafili, Renisa Laçka; Alfredo Germont-Denis Skura, Klodjan Kaçani; Giorgio Germont-Ylber Gjini, Armando Likaj; Gastone-Erlind Zraliu, Flora Bervoix-Shpresa Beka, Ivana Hoxha; Aninna-Dorina Selimaj; the baron Douphol-Artur Vera; the march of Obingny-Bledar Domi, Ogert Islami, the doctor Grenvil-Xhieldo Hyseni; Giuseppe-Erlind Zeraliu; a commission- Genc Vozga. "La Traviata" is a world famous opera, but on the Albanian stage it premiered on December 3, 1956.

"My mother is a cosmonaut", filming at the "Center for Space Research" in France

Venice Biennale, Albania is represented by the work of artist Lumturi Blloshmi

ART Festival, 60th edition on December 27, 28 and 29 at the Palace of Congresses

Xhahid Bushati: "Prefect" should not have been on stage, the main drawback that we do not have researchers to make a scanner of Albanian drama

"Synergy", attention to the creativity of classical music

Actress Edi Luarasi passed away at the age of 81, donated various roles in theater and cinema