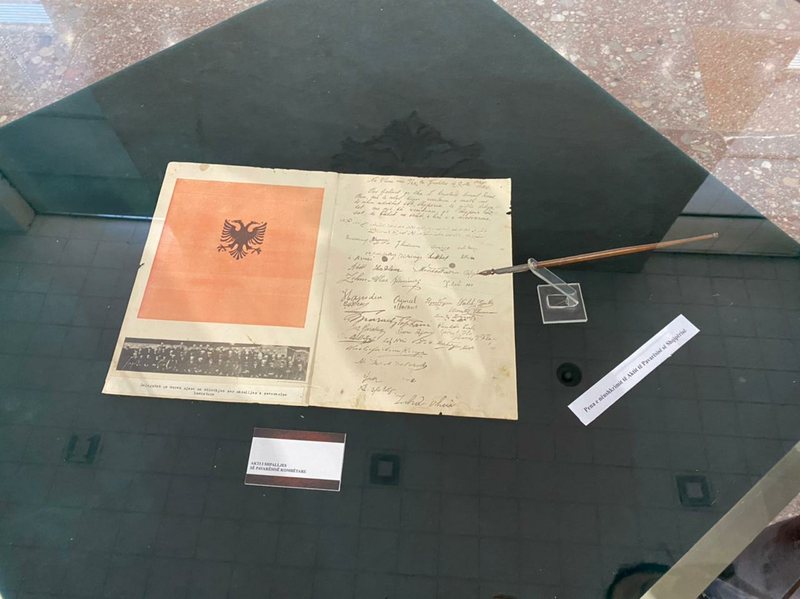 The month of November has been announced by the Ministry of Culture "November of the flag". In this context, the National Historical Museum and the National Library have opened exhibitions. NHM opened the exhibition entitled "Towards Independence", which contains the course of events towards the independence of Albania, as well as artifacts of the signatories. In his speech the director of the National Historical Museum, dr. Dorian Koçi said that this exhibition highlights the special contribution of the signatories of independence. "The special feature of this exhibition lies in the exhibition of some of our most important artifacts which are related to the life and contribution of prominent figures of independence signatories," he said, among other things. While the National Library of Albania opened on Thursday the retrospective exhibition "Echo of Independence in the press of the time", thus opening the cultural activities that will take place throughout the country within the Flag Week, organized by the Ministry of Culture in cooperation with cultural institutions. In the greeting speech, the deputy director of the National Library of Albania dr. Etleva Domi, said that this exhibition, which comes for the first time to the public, covers the period November 1912 - December 1913, based on the fact that the first organs of the Albanian press published within the Albanian lands came out after this important historical event. "The lack of press in the country made the first announcements given by the diaspora press, led by personalities such as: Noli, Konica, Kristo Floqi, Kristo Luarasi, etc.", she said. The retrospective exhibition from the funds of the National Library brings the reflection that this historical event had for the Albanian nation in the press of the time during a year. The Declaration of Independence (or Declaration of Independence) is the declaration of independence of the Albanian vilayets from the Ottoman Empire. Albania declared itself independent in Vlora on November 28, 1912 by Ismail Qemali. The declaration of Independence was attended by 83 delegates from all Albanian territories.

AQSHF, the restoration of films thanks to donors and collaborators

"The Merchant of Venice" by Shakespeare, director Qëndrim Rijani: On stage because of the messages it contains

Bashkim Zahaj: RTSH with the Song Festival should return to the competitions, we are very far from the melodic union of music with the text

Ministry of Culture, application for 2022 projects until January 17

Concert Hall at AI, works not only on strengthening the structure of the building

Emin Riza: The role of the Ministry of Culture and IMK, not at the right level for cultural monuments, needs more attention

The play "I Mephisto", choreographed Gjergj Prevazi: With concept, direction and dramaturgy that conveys ideas both universal and local