The race for the leader of the Democratic Party / Berisha starts the meeting in Vlora with accusations against the government: They used the second mandate to destroy the opposition, this mafia ...

Negotiations for the president failed, comes the first reaction from Sali Berisha

The race for the leader of the Democratic Party / Berisha in Vlora, lays flowers at the monument of Hasan Prishtina

"Many deputies speak with 'encrochat' programs!", Lorenc Vangjeli makes the sensational warning: In Tirana they will land ... 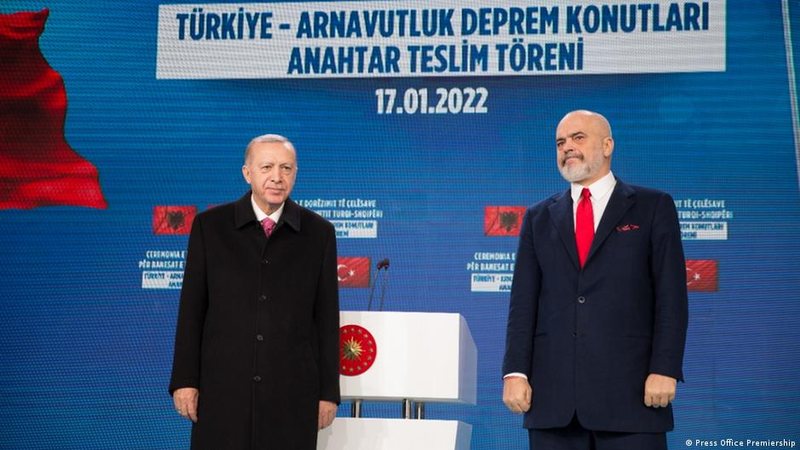 Turkish media continue to write about President Recep Tayyip Erdo?an's visit to Albania. The latter gave a series of strong messages, from the cooperation between the two countries, to the Gulenists, EU integration or the organization of the Muslim Community. "TRT WORLD" has written an article about his visit. The author is Abdulvehab Ejupi, researcher and head of the Balkan Office at TRT WORLD. One issue addressed there is undoubtedly that of the Gulenists. According to the article, Ankara is not very satisfied with the Albanian government in this regard, as it waited for measures to be taken a long time ago. "The recent visit of the Turkish president confirmed that FETO continues to be an important issue between Ankara and Tirana. President Erdo?an devoted an important part of his speech to this topic in the Albanian Parliament, warning that this issue will be crucial in relations between the two countries. Following the events of the defeated coup attempt in July 2016 in Turkey, all the senior Turkish authorities who have visited Tirana have repeatedly insisted on cracking down on FETO structures in Albania. "But so far this request of the Turkish side has not been met by the Albanian authorities", it is said in the writing.

Erdogan's visit is also linked to EU integration, while sending a strong message to Greece. The Greek media were the ones who criticized this visit and you see the Albania-Turkey alliance as dangerous. "Turkish policymakers have always stated that Ankara supports the membership of the Western Balkan countries in transatlantic institutions. Many studies have shown that Turkey and the EU are not competitors in the Balkans, but complementary actors. There is a wide field of co-operation between Ankara and Brussels regarding their policy in the Balkans. For the Albanian Prime Minister Edi Rama, the role of Turkey in our region is irreplaceable, inalienable and without constructive discussion in the service of peace. Last but not least, whenever new steps are taken by the Albanian-Turkish side, certain groups emerge considering this strategic partnership with much skepticism. However, it is already evident that all this comes from the neighbors, especially from the Greeks, who politically and economically want a weak Albania without strategic and balancing alliances ", it is said in the writing.

In the analysis, the author of the article said that the agreements signed during the visit of Prime Minister Edi Rama to Turkey, on January 6, 2021, were a new and historic starting point of Albania-Turkey relations. "As a result of that visit, the Joint Political Declaration for the establishment of the High Level Strategic Cooperation Council between Turkey and Albania was signed, which has been on the agenda for years, and relations between the two countries were raised to the level of Strategic Partnership. Turkey has invested over $ 3.5 billion in Albania since the era of democracy. "Over 600 Turkish companies are registered to operate in Albania and these companies not only contribute to production, but also provide jobs for about 15,000 people," he said.

"It is a sand castle, it does not exist" / Arjan Çani reveals the right name for president: These are the two profiles that Rama would like

"Your escort after my horse has come", the democrat "stunned" Sali Berisha in Vlora: Give a post to Alibeajt, to open and close the door

The race for the leader of the Democratic Party / Berisha starts the meeting in Vlora with accusations against the government: They used the second mandate to destroy the opposition, this mafia ...

Negotiations for the president failed, comes the first reaction from Sali Berisha

The race for the leader of the Democratic Party / Berisha in Vlora, lays flowers at the monument of Hasan Prishtina

The race for the leader of the Democratic Party / "This is a big mess", Ibsen Elezi meeting with personalities, criticism of the opposition: This is where I am focused ...

Erion Veliaj reveals his proposals for president: The time has come for the head of state not to fight with the gypsum workers and to be sober

Challenges Sali Berisha for the leader of the Democratic Party, Ibsen Elezi comes out with a sudden request two days before the elections

The election of a new President / "This process has entered a paradox that has no solution", Fuga: The majority is playing a political game! Better a president elected by the SP than an unfortunate one who came out of such an agreement

Mayor Erion Veliaj said today that after the final of the Conference League, the...