The hot file in the USA, the SP deputy makes a strong statement: They want to remove Edi Rama

"Secret and not at all official connection", the DP deputy reacts on the "McGonigal" case: Rama cannot be prime minister of the Albanians

"No one says...", Kreshnik Spahiu reveals the behind-the-scenes of the "McGonigal" scandal and casts strong doubts: How the ex-girlfriend of the head of the FBI helped Edi Rama

The "McGonigal" scandal/ Gjiknuri admits it: I also met the former FBI agent, I don't give details about what we talked about, but..

Who is the darling of the West? Kreshnik Spahiu reveals the senior politician: He received a strong political and media blow

"We are like the "banana republics" that use dirty money...", Abilekaj reacts harshly: Edi Rama cannot escape, he destroyed the image of Albania

Serious event/ From the fifth floor to the ground floor, the elevator with people inside in Tirana breaks off

Haxhi Krasniqi returns to the ring, the next duel on February 25 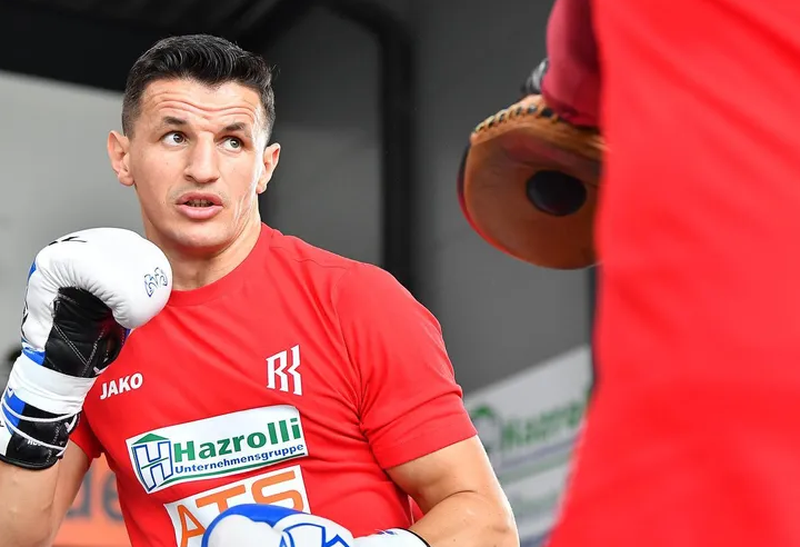 Haxhi Krasniqi has decided to box again. One of the best Albanian boxers in history announced on Monday that he will enter the ring on February 25. He will be part of the boxing evening that will be organized in Munich, Germany. Apart from Krasniqi, other Albanians will also box, such as Shefat Isufi, Isuf Kelmendi, Kushtrim Tahirukaj, James Kraft (Musa Avdimetaj) and Armend Xhoxhaj. The opponent of the 35-year-old Krasniqi has not been made official yet. Krasniqi is known as Robin, while he will seek his 52nd victory in professional boxing. He has a record of 51 wins and seven losses in his long career that started in 2005. Junikasi Krasniqi last boxed on October 9, 2021. He lost on points, with a questionable decision, to the German Dominik Bosel. Krasniqi and his camp have long claimed that the assessment was unfair and demanded that the victory go to him. They even filed complaints, but the decision was not changed. Krasniqi had defeated Boseli on October 10, 2020, in the fight for the interim world title in the light heavyweight category in the WBA version, which is one of the four major versions of professional boxing. The temporary title that Krasniqi won in the meantime was extinguished by the UBA federation. That duel on October 10, 2020 was also valid for the title in the IBO version. Krasniqi has long held the European title in professional boxing, while fighting for world titles with Jurgen Braehmer and Nathan Kleverlin. He suffered losses from them. It has also been lost by the legend Arthur Abraham, but has scored many great victories during his long career. After a longer break, Krasniqi returns to the ring again, in an attempt to once again touch the highest level of professional boxing.

Is Man City really threatened with expulsion from the Premier League?

Sad, great loss for football/ Dead is pulled from the ruins of a goalkeeper's building in Turkey

Sahit Prizreni: The scholarship belongs to Zelimkhan Abakarov, KOKSH has not taken a stand on what happened with athletics

Ethemi gets a "super tour" in Turkey, another goal for Istanbulspor

Laçi had problems before Partizan, Tirana felt the weight of departures in January

Derby only for prestige, Inter very strong for Milan, Lautaro gives "aspirin" to his team, Milan goes down to the "abyss"

Muriqi "shakes" the net, Mallorca deals a heavy blow to Real in the race for the title

Ronaldo and Neymar celebrate their birthdays today, this is how old the football stars are

Ilir Shaqiri makes Olta paranoid, the actress catches up with Luizi: I knew it meant something, I knew it! Here is the singer's reaction

Olta and Luizi continue to catch up with each other, not letting go of the ironi...

The former resident of BBV returns home and makes an unexpected gesture, the competitors are surprised (Photo)

Ilir Shaqiri strangled Olta inside the house of Big Brother VIP Albania, this is what he said to her after he jumped on her neck

Among the well-known characters, Alban Skënderaj has "two words" about the earthquake in Turkey and Syria!

Alban Skënderaj remains one of the most beloved singers and songwriters for...

"I can't be bought with money like Olta"/ Zhaklina reacted after the publication of the audio showing the blackmail of Olta's husband.

What happened between the couple? "I've kissed him a lot, he's starting to get bored"/ Kiara 'explodes' badly at Luiz: Ow? Run away and don't come near me anymore..

The romance between Kiara and Luiz seems already consolidated and after the firs...

The political, diplomatic and patriotic misery ...

In no city of Albania are promises "kept" as in...