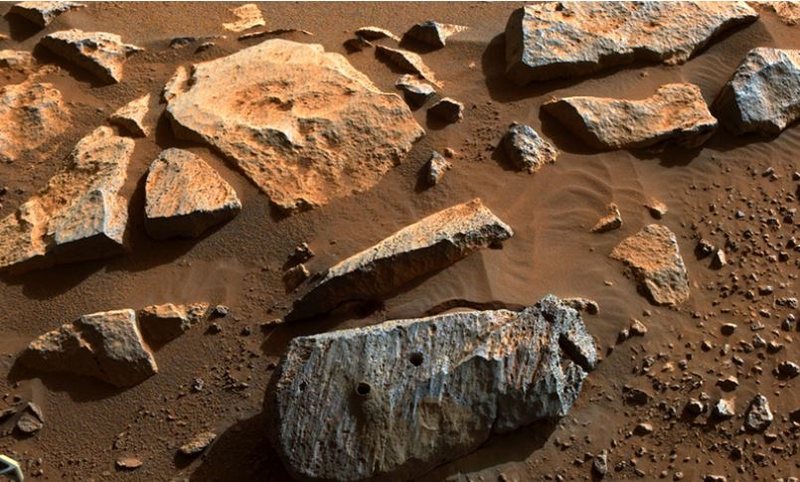 NASA Perseverance robotic rover has recently made it possible to take two samples from the rock found on Mars, where the first data proves their long-term exposure to water in the distant past.

Foreign media suggest that according to the assessment by scientists shows that the Jezero crater where the rover is located, once had a large lake with water for a long time.

The first rocks from which samples were taken are basaltic in their composition and are probably the product of volcanic flows of lava of the past. The presence of salts in rocks "proves" that they were once exposed to water, said NASA scientist Julia Goreva.

NASA knew there was once water in this area of ??Mars, but not for how long. Water now seems to have existed for a long time, for tens of thousands or even millions of years.

"It seems that our first stone samples reveal a potentially welcoming and sustainable environment. "It's really a lot of work that water has been there for a long time," said Ken Farley, a scientist at NASA's Jet Propulsion Laboratory.

Exploration of the Jezero crater will continue for about two years, the other target of the drilling rover is at a distance of 200 meters area "South Seitah", which is covered with dunes and rocks.

Perseverance has been on Mars since February 2021 and has already traveled about 2.2 kilometers, with the help of the small robotic helicopter Ingenuity, the first to fly to another planet.

WHO gives the good news: If all states act this way, this will be the last year of the pandemic

Strong warning from Britain comes to Russia: Invasion of Ukraine would be a painful, violent and bloody undertaking

Will the war break out? NATO countries send ships and planes to Eastern Europe, tensions rise in Ukraine

Scientists release alarming study: 65% of people who have passed Covidine may have permanent loss of ...

Is the world coming to an end? Scientists' Prediction: This is when the earth's life cycle ends

Terror at a university in Germany, several students wounded with firearms, the perpetrator commits the extreme act

Threshold of war in Ukraine? After the USA, the United Kingdom also withdraws its diplomatic staff, and the decision of the European Union is clarified.

"It hurts us to see what is happening in Ukraine" / Towards military clash, a European country ranks next to Russia against Ukraine

Official Russia denies, it is learned who is the Russian politician that Putin wants to infiltrate in Ukraine, his profile is revealed

On the eve of a war / Fear of Russian occupation, the US comes out with an urgent call and urges American citizens to leave this country. What is being planned is revealed

Vucic: Serbian elections will be held in Kosovo, otherwise there are consequences, Pristina is not interested in dialogue

After several days of silence, Alvisa has reacted on social media after splittin...

Well-known DJ Vin Veli, has been in the spotlight of the pink media for his rela...

Famous actress Monika Lubonja is this week in the nickname together with Arber. ...

Ilir Shaqiri and Monika Lubonja are the two residents who have joined the "Big B...

At the house of "Big Brother VIP" on Wednesday, an award ceremony took place, wh...

Former resident of "Big Brother", Neda Balluku, has distributed on her personal ...